Krypton provides the best of both worlds: the security of the private key never leaving your phone with the convenience of using the key wherever you’d like by pairing Krypton with a computer (via a simple QR code scan). In this article, we discuss how Krypton achieves fast, reliable, user-friendly, and most importantly secure private key storage.

Krypton is designed such that you do not have to trust us, krypt.co, to operate any third party service. You need only trust the code running on the Krypton phone app.

Our system consists of three components: (1) the Krypton phone app for iOS and Android, (2) the krd daemon that runs in the background on a macOS or Linux computer or browser (Chrome, Safari, Firefox), and (3) the browser interface for U2F or the kr command line utility that manages krd.

The Krypton phone app, referred to as “Krypton” in this post, generates and stores your private key on your phone and uses it to sign U2F challenges, SSH login requests, and Git commits/tags from a paired computer/browser running krd. The private key never leaves the phone. If you are curious how the private key is stored on the phone read about it here.

krd is the agent that hooks into the client side authentication tool (the browser/webpage U2F support, an SSH client, or the Git cli). Every time you attempt to authenticate, krd is responsible for communicating with the Krypton app, requesting a signature, and waiting for a response.

kr is the user interface to krd. The main functionality of kr is to initiate pairing the phone with the computer/browser, discussed in the next section.

Pairing establishes an authenticated and encrypted communication channel over an untrusted medium. When krd asks Krypton for a signature, this request must be (1) authenticated to ensure that it is coming from an authorized computer and (2) encrypted as it contains sensitive data.

We use 3 untrusted communication channels to communicate between your phone and computer: Bluetooth, AWS SQS, and AWS SNS. AWS SNS is a service for delivering push notifications; it utilizes APNS (iOS) and Firebase (Android) which are both untrusted. For the rest of this post, you can assume all messages are sent simultaneously on all channels unless otherwise noted.

The pairing protocol between a computer running krd and the Krypton app is as follows: 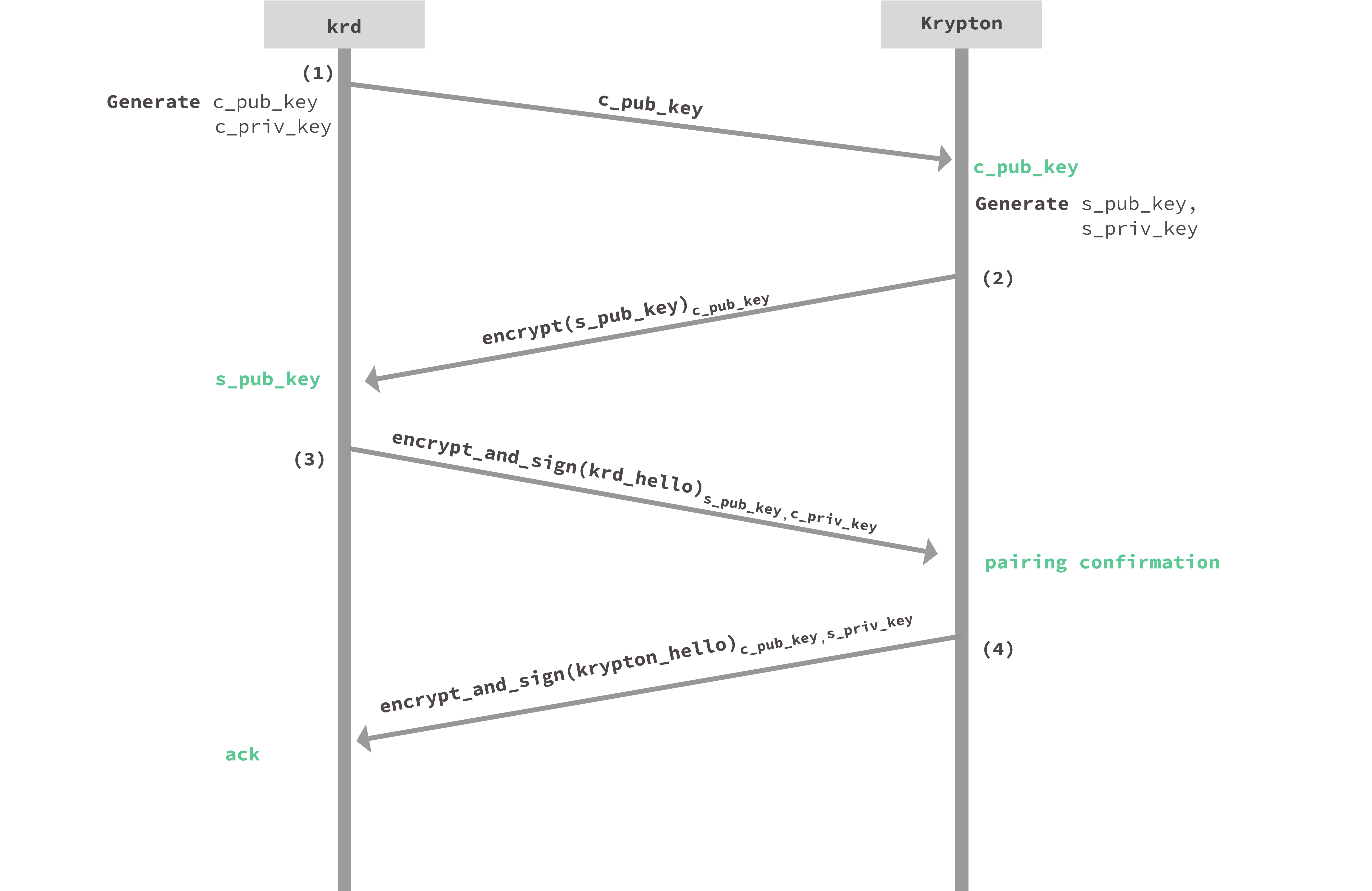 First, the user initiates pairing on the computer/browser.

Next, krd generates a new key pair for this pairing: c_pub_key, c_priv_key. krd then displays c_pub_key in a QR code.

Upon receiving c_pub_key, Krypton generates its own session key pair denoted s_pub_key, s_priv_key. Next, Krypton sends its session public key encrypted with krd’s public key, denoted as step (2) in the diagram above, to krd. This tells the computer/browser that a Krypton client has scanned the QR code and wants to initiate a pairing.

s_pub_key is encrypted under c_pub_key to prevent an active adversary from switching out s_pub_key to another public key. An adversary would have to know c_pub_key to be able to insert its own public key. This creates a race: krd only remembers and responds to the first Krypton client to send the message in step (2). The next step allows Krypton to confirm that krd paired with it and not any other client.

Upon receiving s_pub_key, krd can now send encrypted requests to Krypton. Krypton can verify these requests with c_pub_key from step (1). To acknowledge receipt of s_pub_key, krd sends the encrypted and signed krd_hello request, asking Krypton to confirm the pairing (step (3) in the diagram above). If some other client completes step (2) first, Krypton will timeout while waiting to receive a krd_hello. In the case of a timeout, the user runs kr pair to try again with new session keys.

Upon receiving krd_hello, Krypton sends the final pairing message, shown in step (4). The krypton_hello message contains various information about the Krypton device such as it’s user friendly name, a push token identifier so it can be reached via AWS SNS, as well as its SSH public key (if developer mode is enabled. This message serves as a pairing confirmation acknowledgement for krd.

krd forwards public-key cryptography authentication requests from the computer/browser to Krypton. If the user approves this request, Krypton performs the private-key signature and returns the signature in its response. 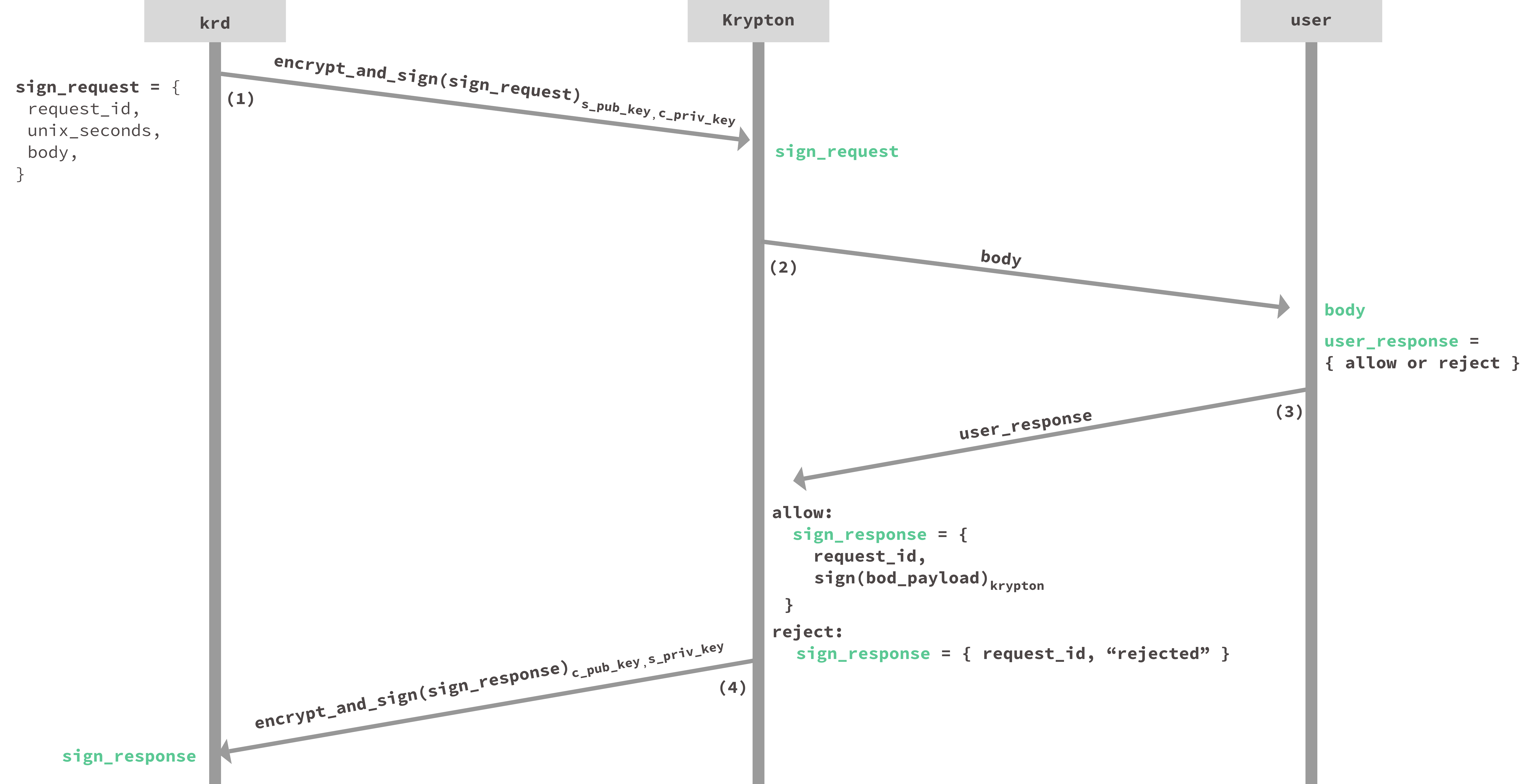 This protocol is initiated when the user attempts an authentication (such as a U2F login or SSH login). 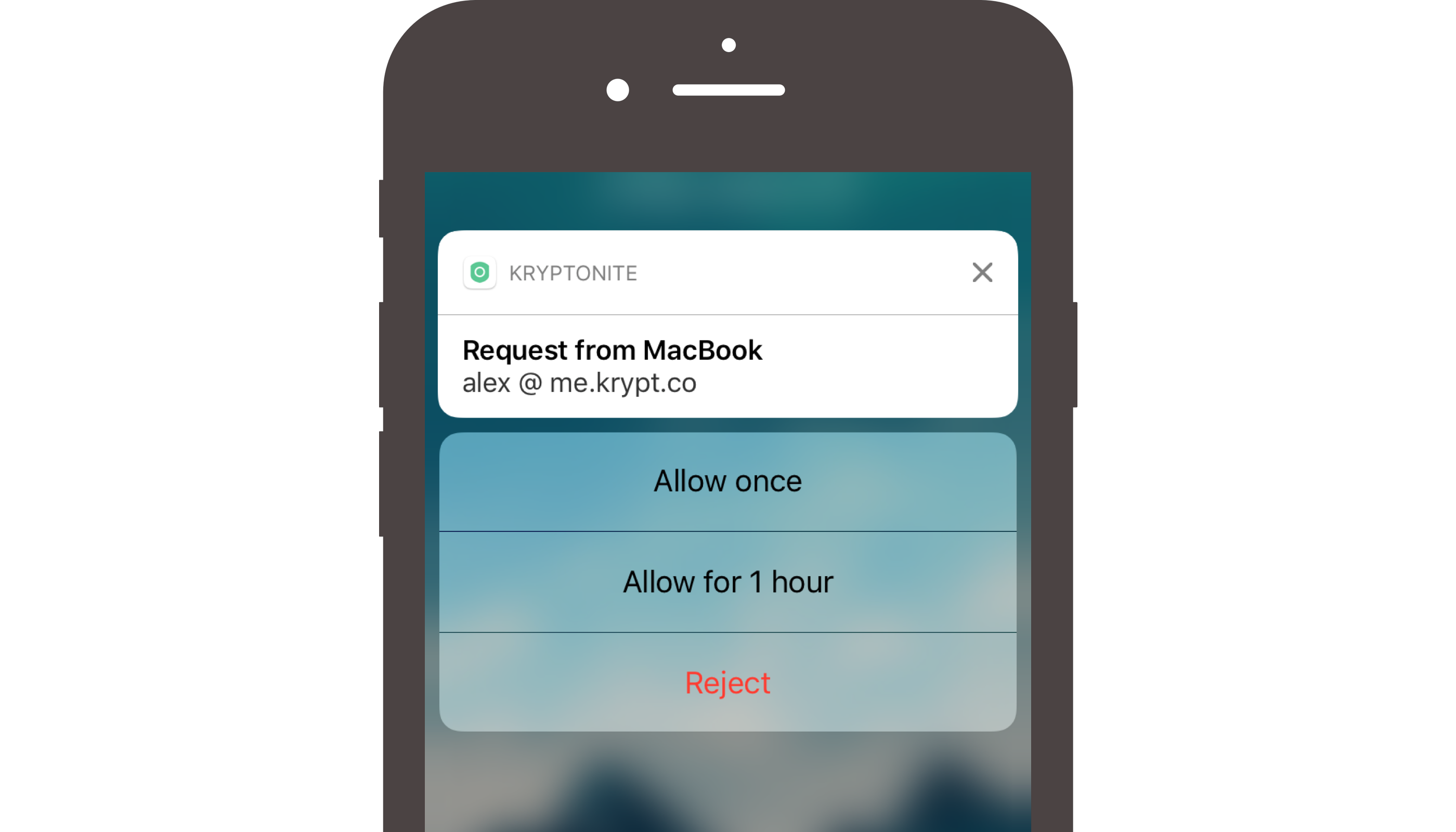 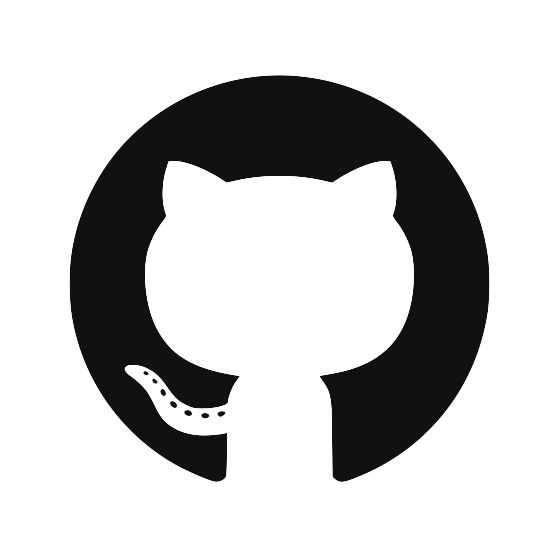